Blog posted by hcwhglobal-admin on January 11, 2016

The groundWork reports are published annually to examine the state of environmental justice in relation to particular themes.

The report is published on the start of the climate negotiations in Paris where a new treaty is supposed to be inked. It argues not only that the negotiations will not produce a result adequate to the challenge, but that the parties are looking for a dysfunctional climate regime. It opens with an account of the scale of emission reductions now required and a rapid survey of already dangerous climate impacts. It then gives a brief history of the negotiation process to account for how it has achieved ever more dismal outcomes. All countries have submitted pledges to the UNFCCC ahead of the Paris COP and the sum of them adds up to disaster. 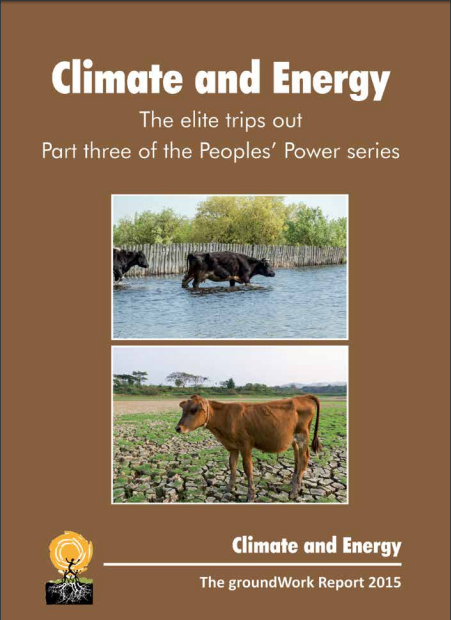 South Africa is amongst the top 12 producers of carbon emissions. The report examines its submission, judged ‘inadequate’, and climate policy. For corporate South Africa, ‘inadequate’ translates into over-ambitious. Amongst their regular complaints is that climate and energy policy are not aligned. We agree. South Africa’s energy plans scarcely recognise its climate pledge and the Department of Energy is well aligned to the corporate view. The report looks at the long running power crisis and argues that it is not just Eskom that is failing.

The model of development that has shaped South Africa over the last century is based on cheap coal, cheap labour and heavy duty pollution. It is now broken.

To download the report, click here.There is no certain outcome to the political battles of the next decades but it is certain that survival is at stake. The concluding section asks “whose survival?”