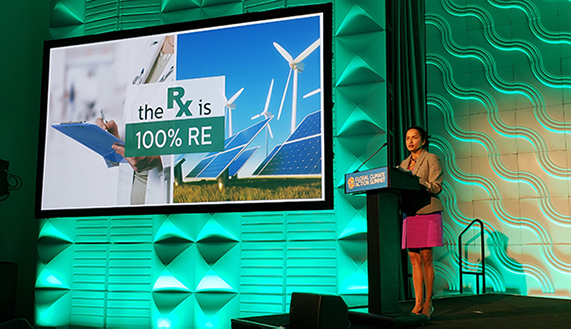 [September 26] Health care has responded to the Global Climate Action Summit’s call to “take ambition to the next level” by committing to power 1,200 health facilities with 100 percent renewable electricity.

In making this commitment, health care is joining thousands of cities, companies, higher education, and other organizations making similar commitments as part of a worldwide effort to accelerate the transition from dependence on fossil fuels to an economy based on clean, renewable energy such as wind and solar.

In the session “Our Clean and Renewable Future,” Dr. Aparna Bole, Health Care Without Harm board member and University Hospital’s division chief for general pediatrics and adolescent medicine, announced commitments by 18 health care institutions, representing the interests of more than 1,200 hospitals and health centers in 10 countries, to implement 100 percent renewable electricity in their facilities.

“Climate change is a health issue for everyone, everywhere in the world,” Bole said. “What we are witnessing today will only get worse. And if we don’t transition quickly, it’s a very bad prognosis. The good news is a transition to clean, renewable healthy energy is a prescription for a healthy planet.”

When fully implemented, these 18 institutions will collectively be serving over 23 million patients per year at facilities powered by 3.3 billion kilowatt hours of renewable electricity. In doing so, they will have reduced their aggregate annual greenhouse gas emissions by over 1 million metric tons of carbon dioxide emissions (CO2e).* This is equivalent to:

The group of hospitals includes leading health systems with large carbon footprints from the United States such as Kaiser Permanente, University of California Health, and Partners HealthCare, as well as similar institutions in Spain, the Netherlands, and Morocco.

“Climate change is here. We are seeing the effects of it in devastating wildfires, hurricanes, and droughts already impacting people’s lives,” Kaiser Permanente Chairman and CEO Bernard J. Tyson said in a news release. “At Kaiser Permanente, we understand that one of the most effective ways to protect the health of the more than 68 million people in the communities we serve is by ensuring healthy environmental conditions. By investing in renewable energy and becoming carbon neutral, Kaiser Permanente is helping to prevent climate-related illness for people worldwide.”

In the Netherlands, Radboud University Medical Center will be serving its community with 100 percent renewable electricity by 2024. By working with a local partner, they will be able to secure over 85 million kilowatt hours of electricity from renewable sources.

By harnessing the power of the Moroccan sun and geothermal energy, Centre Hospitalier Universitaire Mohammed VI in Marrakech is committed to running its facilities on 100 percent renewable electricity by 2030. This will reduce their annual greenhouse gas emissions by over 7,000 metric tons of CO2e.

Transitioning away from coal-fueled power sources has been shown to generate immediate health benefits, and hospitals and health centers worldwide are increasingly choosing renewable electricity in order to protect their patients from toxic air pollution as well as the adverse health impacts of climate change.

*University of California (UC) Health kilowatt usage includes both health systems and campuses. For health systems that did not provide projected CO2e emissions reduction, the emissions were calculated using the EPA Center for Corporate Leadership Simplified GHG Emissions Calculator based on their eGrid region.